This had intended to be a semi-regular series, but considering that the first and last ‘local lunch’ post I wrote was in July, maybe it will be a occasional-regular feature on the blog!

A couple of weeks ago we were busy in town starting our Christmas shopping when we decided that we would get lunch out to recover from the ordeal. Despite living in Inverness for over 18 months, there are still a couple of local places that we haven’t got round to sampling yet. Aspendos was one of the places at the top of the list!

Situated on Queensgate which is not one of the main shopping streets, yet a popular thoroughfare to and from the train station, the restaurant offers a lunch menu, lunch tapas offer, and a main menu with a wide variety of dishes to choose from. There were a few other parties at the time we visited, but it was not crowded and we received attentive (though not pushy) service. If we hadn’t have been sitting by the window it would have completely felt as if we were not in Inverness at all, as the interior was full of traditional decorations. 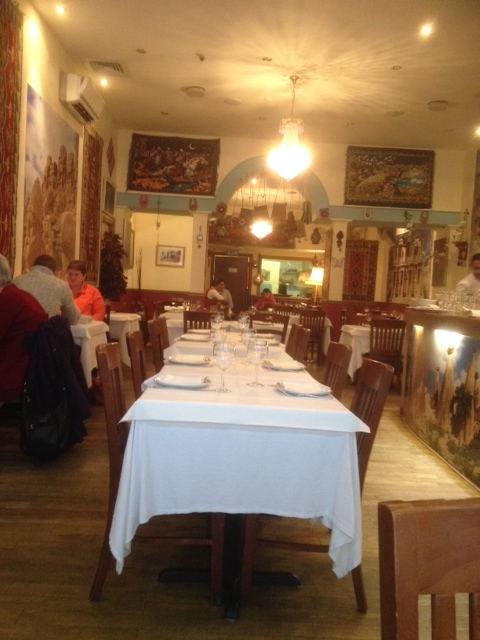 Onto the food and we both chose from the 2 course lunch menu.

We both chose the Meze Tabagi (mixed meze) as a starter, with the staff adhering to Mr B’s request for a nut free starter. We both had humus, tarama salata, Ispanak Tarator  (spinach, yoghurt, garlic and olive oil), and Satsuka (Potatoes, aubergine, carrots, courgettes, onion, red & green peppers puree and chickpees). While I had Kisir (crushed walnuts, hazelnuts, bulgur wheat, tomato juice, fresh herbs, red & green peppers and onions) as my remaining element of starter, Mr B had Zeytinyagli Bakla (fresh broad beans, red & green peppers, garlic, coriander, dill and olive oil served with yoghurt). All were delicious, well flavoured and well presented – I liked the idea of separating each meze with the slice of cucumber!

We also had some complimentary bread and other dips brought to the table. 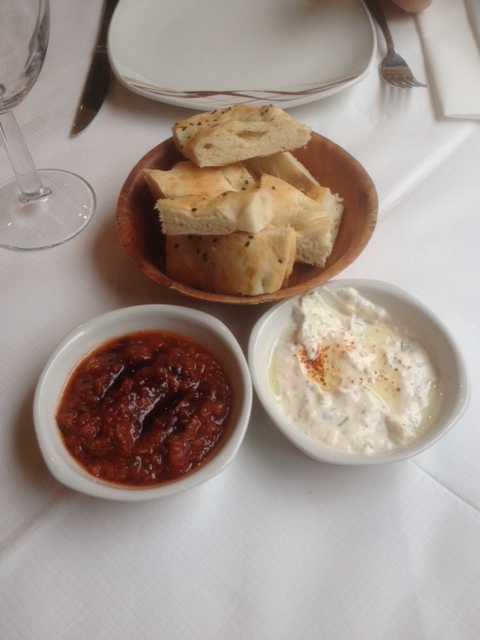 Mr B chose Sebzeli Kofte as his main course (Minced lamb, potatoes, peas, carrots and Aspendos sauce with rice) which was delicious – the lamb was well spiced, sauce well seasoned and generously portioned:

You may not see any salad, but I can assure you it was there under the chicken, walnuts and homemade bread! I was very surprised to find that the walnuts made an excellent accompaniment in both terms of taste and texture to the chicken. Another plus point was that the mayo mentioned in the description was very thin-it certainly didn’t feel that the salad was coated in it by any means.

Our lunch cost £22 (the lunch deal was £8.95 each and we also had a soft drink each) which we found to be excellent value for the delicious food we ate. We’d definitely return in the future – I’m already trying to find a nut-eating companion for the mezze deal!

I received no incentive for this review – we went, we paid, we ate, we enjoyed immensely!

I’m Susan and welcome to A Highland Blend – a collection of foodie, lifestyle and travel posts. Stay and have a look around my little corner of Scotland! To find out more about me and this blog, check out my about page.

If you’d like to get in touch or collaborate, please contact me using any of the social media links below.

I’m Susan and welcome to A Highland Blend- a collection of foodie, lifestyle and travel posts. Stay and have a look around my little corner of Scotland! To find out more about me and this blog, check out my about page.

This post is a review post. I received two nights complimentary accommodation in exchange for an impartial review of the Lighthouse Keepers Cottage. There’s a definite rise in people looking for unique self catering accommodation for their holidays, whether that’s by way of dramatic location, timeless features of the property, or proximity to experiencing life…

END_OF_DOCUMENT_TOKEN_TO_BE_REPLACED

One of our regular go-to spots in the county of Caithness is the sprawling Dunnet Beach, which is also very close to a favourite puffin spotting site at Dunnet Head. There’s also the famous Dunnet Bay Distillery which sports Rock Rose Gin as its flagship spirit, but there’s also a spot which we only visited…

END_OF_DOCUMENT_TOKEN_TO_BE_REPLACED

An earlier visit in the year to Latheronwheel Harbour revealed signs towards Latheronwheel Strath. Until we set foot on this beautiful glen, we didn’t realise the incredible work that local volunteers do in creating and maintaining the magical fairy glen, which you can find next to the woodland burn which runs down into the North…