After our lunch at Shambles Kitchen, we did some more ambling around the city of York and it’s various second hand bookshops, before having a mid-afternoon pitstop in York Cocoa House. There seems to be a real history connecting York and chocolate, with a whole museum and even a chocolate trail around the city.

York Cocoa House is the dream of Sophie, who you can read about here. The pride and joy she takes from chocolate is infectious!

There was a wide variety of goods to buy as we entered the shop, and also a chocolatier hard at work making some Easter eggs. However we went straight to the cafe area to peruse the drink and sweet things menu. 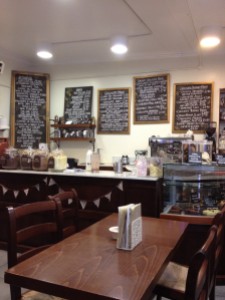 I went for the Afternoon Tea, which meant I could choose a Hot Chocolate to accompany my chocolate and cherry scone. I went for an unlikely choice (for me) – peanut butter! It really was delicious and I wondered why I don’t eat more peanut butter (although I would never have it spread on toast, it’s a bit like coffee for me – a cup of it is too much, but I would enjoy a nice mellow coffee flavoured cake). My scone had some lovely chunks of milk chocolate and cherry to complement the jam and cream. The texture of the scone was a little too chewy for my liking, but that’s the only thing I could really fault about it!

Mr B went for a mint chocolate milkshake using local Yorvale ice cream and chose a (huge!) slice of Chocolate Stout cake. He said it was it was great, having a moist sponge and a creamy ganache (but did confess to feeling sick later in the afternoon due to the amount of chocolate consumed!)

Much later on, after we checked our bags into Marmadukes, we headed back into town for a final wander of the shops and a pre-dinner drink.

I found some bargainous glasswear, which I’ll share more details on in my “New in my Kitchen” post at the end of March.

We stumbled upon The Hop, a real ale house. Mr B was revelling in an American pale ale remnicscent of our trip to the USA last year, and I found a delicious new elderflower cider, which definitely could rival my love of Thistly Cross!

For dinner, we used our taste card to get a discounted dinner. There were a couple of places we could have tried, but we were only in York for a night, and when we stayed in the Lake District for the few days before we had exclusively Modern European food, so we fancied somewhere with a varied menu. Enter Banyan Bar and Kitchen.

Even on a Tuesday night the place was busy with a mix of people enjoying drinks, with or without dinner. We got 2 for 1 across all courses, so we picked a starter and a main each.

Mr B: calamari to start, followed by the ranch burger (cajun spiced chicken pattie, mushrooms, mayo, Carolina BBQ sauce and onion rings). He had no complaints about the burger, but did say that some of the larger calamari were chewier than they should be. 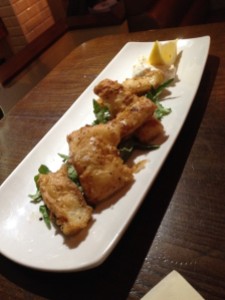 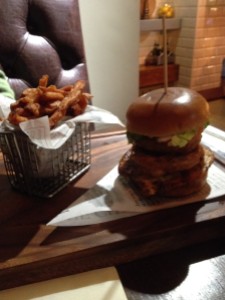 (apologies for the poor quality photos!)

I went for spring rolls to start, followed by a Lamb Kofte Salad. 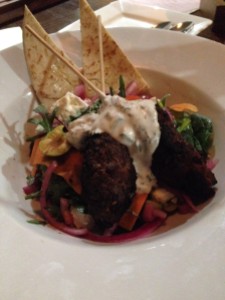 Presentation of both dishes were excellent. The pastry was crispy, not greasy and filled generously with duck.

The salad was varied and plentiful – with lots of large olives, rocket and other leaves, feta, and two large lamb kofte skewers. It also came with two pitta bread halves, of which I managed one. Apart from one of the kofte being a little on the burnt side (which I didn’t complain about as I didn’t eat the whole dish anyway), it was just what I wanted to pick at after the afternoon treats in York Cocoa House.

With the taste card discount we paid just over £30 (saving us £17) for two 2 course meals and a cocktail for me.There was a wide selection of dishes on the menu and while the food was good, you would get a more sophisticated meal elsewhere. We would return here for a fun evening with friends. rather than a romantic dinner on account of the lively bar atmosphere. Service was attentive and friendly.

Come back tomorrow for a peek at what we enjoyed during our stop in the Lake District!

I’m Susan and welcome to A Highland Blend – a collection of foodie, lifestyle and travel posts. Stay and have a look around my little corner of Scotland! To find out more about me and this blog, check out my about page.

If you’d like to get in touch or collaborate on my blog, please contact me using any of the social media links below.

I’m Susan and welcome to A Highland Blend- a collection of foodie, lifestyle and travel posts. Stay and have a look around my little corner of Scotland! To find out more about me and this blog, check out my about page.

UPDATE: Due to the ongoing situation of COVID-19, a lot of the events planned for this year have been cancelled/postponed. Now that we’ve left the long month of January behind, we can look at the events that are coming up in Caithness throughout 2020. This post will be added to regularly throughout the year to…

END_OF_DOCUMENT_TOKEN_TO_BE_REPLACED

Caithness is full of talented makers, crafters and artists. It’s also home to the very special Dunnet Bay Distillery (see here for my tasting/tour review), home of Rock Rose Gin. Their cosy and welcoming tasting room is home to their debut art exhibition, which features work by twenty-nine artists who were ‘Inspired by Gin’. We…

END_OF_DOCUMENT_TOKEN_TO_BE_REPLACED

This post is a review post. I received two nights complimentary accommodation in exchange for an impartial review of the Lighthouse Keepers Cottage. There’s a definite rise in people looking for unique self catering accommodation for their holidays, whether that’s by way of dramatic location, timeless features of the property, or proximity to experiencing life…