Well, that’s January been and gone. I know some people really struggle with January, especially after the excitement and bustle of Christmas, but I really don’t mind it. The nights are getting longer already, there’s opportunities to enjoy real warming comfort food and it’s a good chance to get organised for the year ahead. I’m also a fan of January as I’ve taken part again in #JanuaryJoy,  run by Rebecca from Florence Finds.

Here’s a round-up of the prompts I blogged about: 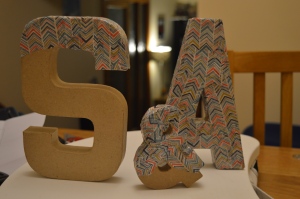 Details of my health and fitness goals for 2015 – I also did a mid month update and I’m happy to report that in w/c 19th January I travelled 37km – I did tons of walking and swimming last week. This week I travelled 25km,  so I’m happy to say I smashed my 90km target by 12 km (If you work in imperial units that’s 63 miles)! I definitely enjoyed trying to meet my target, so I will be trying during the rest of the year to match this achievement. It will be harder to measure next month as we’ll be on holiday for part of February, but I’m sure there will be opportunities to get out and walk and enjoy the end of the winter season!

January also saw the start of a foodie challenge – my 2015 Cooking the Books challenge. I’ve spectacularly failed one element of this challenge, not to buy any more recipe books (I’ve bought eight and been given two – oops!), but I’ve enjoyed consulting my stack of recipe books for new recipes to try. However the ‘try a new recipe‘ prompt actually used a gluten free dessert recipe which was yummy and one I will definitely repeat!

As well as being busy with cooking, walking and swimming and the other usual life stuff, I rounded up three books that I was working through. Unfortunately I’ve not made time to read much in the last couple of weeks, but you can read about the books I’ve got on my bedside table. I’ll be taking these on holiday next month!

We also managed to squeeze in a day out just at the end of this week, which featured a trip on a funicular railway and a delicious lunch in Aviemore.

So, that was January! I’ve actually got one more post which I’ll be posting in the next week or so once I’ve finished the project. The post will detail how I captured some memories (and made something with my hands in the process!)

I’m Susan and welcome to A Highland Blend – a business service primarily promoting the people, products and places in the far north of Scotland. I offer digital media and VA support services for businesses in Caithness and beyond. To find out more, please check out my About Me or Available Services pages. To sign up for monthly business emails, please click on the image below!

I also love to help locals and tourists alike discover the best of Caithness and the rest of the Scottish Highlands, so you’ll also find blog posts that will help plan your itinerary, whether you are looking for ideas of places to visit or to eat and drink.

If you’d like to get in touch, please drop an email to hello@ahighlandblend.com, or from the social media links below.

POSTS FOR VISITORS TO SCOTLAND